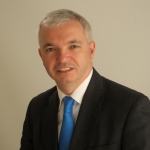 Mark Menzies has been the Conservative MP for Fylde since his victory in the 2010 General Election.  He has been an active member of the Conservative Party since 1987.Mark grew up in Ardrossan, a small town on the Ayrshire coast, raised by his mother after his Merchant Navy father died a month before he was born. Mark's mother worked shifts at the local ICI factory to support them, giving him an early understanding of the importance of self-reliance and managing finances.